NASA has announced a new planetary science mission where a quadcopter will fly around the surface of Saturn’s moon Titan. The mission was announced June, 27 and the drone will sport 8 rotors and a nuclear power source like the Mars Curiosity rover. Dragonfly will launch in 2026 and arrive at Titan in 2034. The mission is set to build on key discoveries made by Cassini, which saw its 13-year mission at Saturn end in 2017.

Dragonfly will cover more than 175 kilometers during its 2.7-year mission, first landing at Titan’s vast Shangri-La dune fields, the same region where ESA’s Huygens probe landed in 2005. The 3-meter-long probe will touch down almost precisely one Saturn year after Huygen’s historic descent, meaning that Huygens’ experience provides a direct test of the environment through which Dragonfly will enter.

The spacecraft will visit new locations using increasingly longer flights, building up to 8-kilometer trips during which it will scan the surface with science instruments and collect samples for analysis. Its lifetime is theoretically limited only by the decay of its plutonium power supply; it could last 8 earth years. 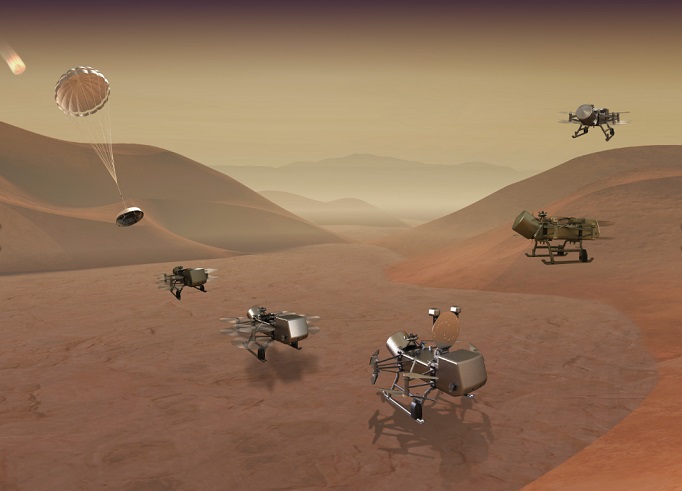 New Frontiers missions are proposed by scientists at research and academic outside of NASA and must adhere to a specific list of destinations derived in part by the planetary science community’s 10-year Decadal Survey. Those destinations originally did not include Titan, but they did include comet sample return. Dragonfly was selected over the other New Frontiers mission finalist, CEASAR, which would have returned a sample from comet 67P/CHuryumov-Gerasimenko.

Dragonfly’s website says the spacecraft will use mass gamma-ray spectrometers to measure the chemical composition of Titan’s surface. It will also be equipped with cameras, meteorology sensors, and instruments to perform seismic studies.

The moon is larger than Mercury and covered in thick orange smog, with an organic-rich atmosphere that has been producing complex carbon-rich compound for 4 billion years. The moon’s atmosphere is almost entirely nitrogen, with methane acting like water does in Earth’s atmosphere, forming clouds, raining, and running off into rivers and seas. High above the ground, solar radiation converts the methane and nitrogen into a complex organic substance that slowly settles onto the surface. A similar combination of energy, organics, and water may have originally sparked life on Earth. Dragonfly proposes to sample the materials that form Titan’s icy bedrock and thick snow to determine what compounds they contain.

NASA has also announced other new missions recently. The agency said twin missions, Punch and Tracers, would seek to further scientific understanding of the sun. Also, back in May, the Trump administration renewed its drive to return astronauts to the moon in 2024, renaming the mission Artemis and seeking an additional $1.6 billion in funds for NASA as a down payment.