Paying attention to everything the FAA has put forth since their rules and regulations were initially put into full effect is crucial for all drone fliers. Although, do you know the laws and regulations related to drones in your state, as well?

If you’re a drone lover in Iowa, then you absolutely have to get some footage of Albert the Bull. He’s 30 feet tall with 15 feet between his horns – the perfect spot to go into Automatic Hold and get an awesome shot! You can find him in Audubon.

The High Trestle Trail Bridge spans the Des Moines river, has insanely beautiful views, and is built on the old remains of a railway bridge. It brightens up with illumination during the night, which is something you don’t want to miss! You can find this wonder in Madrid.

Remember to always check whether or not you can legally fly in an area before you do so – better safe than sorry!

The Registering Process in Iowa

The Federal Aviation Administration (FAA) requires that all Small Unmanned Aircraft Systems (UAS) owners follow strict regulations and laws. You will need to file your name, home address and your email address as a start. 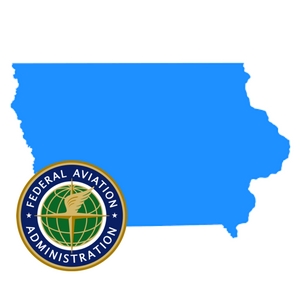 From there, you will receive a Certificate of Aircraft Registration and Proof of Ownership. These will include an identification number for your aircraft. You must have this number displayed on your drone at all times. The number will be valid for up to 3 years.

All aircraft that weighs more than 0.55 pounds, or 250 grams, and less than 55 pounds, or 25 kilograms, must be registered. This also includes any added payloads, such as an onboard camera.

You must be at least 13-years-old in order to register and, effective December 21st, 2015, all newly purchased or made drones must be registered before their first flight. You are able to register through a paper-based process, but you can also do so online by clicking here.

Proximity to Airports in Iowa

As a general rule of thumb, and in accordance with the law from the FAA, you may not fly within a 5-mile radius of any airport. In 2012 the FAA enacted the Modernization and Reauthorization Act which requires hobbyist drone operators, meaning residential, to contact air traffic control and/or airport management if they are operating within a 5-mile radius of any local airport. 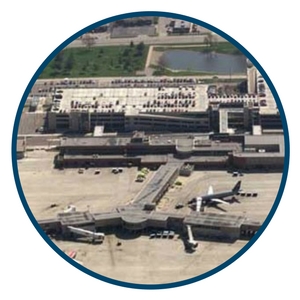 This is enacted nationwide, not only in Iowa, under Part 101 of the Act, being Special Rule for Model Aircraft, to ensure that drone operations under unsafe conditions are disapproved before the drone can be launched.

Regardless of the local airport you will be flying near, and possibly breaching airspace, you will need to contact either the airport air traffic control tower or the airport operator.

You will need to establish an agreed-upon operating procedure with airport air traffic or the airport operator and answer a couple of questions. For example, questions relating to how long you are going to be flying for.

At this time of writing, all of the legal information listed below is deemed as accurate as possible and fully in effect.

Use of unmanned aerial vehicle for traffic law enforcement prohibited.

The state or a political subdivision of the state shall not use an unmanned aerial vehicle for traffic law enforcement.

Other Legal Issues With Drones in Iowa

At this time of writing, there are currently a number of bills in circulation within the state of Iowa surrounding drones.

An Act relating to operating an unmanned aerial vehicle in, on, or above a county jail, municipal holding facility, detention enter for juveniles, or institution under the management of the department of corrections, and providing penalties.

As used in this section:

“Facility” means a county jail, municipal holding facility, secure facility for the detention or custody of juveniles, or institution under the management of the department of corrections.

“Unmanned aerial vehicle” means a vehicle or device that uses aerodynamic forces to achieve flight and is piloted remotely.

An Act relating to the use of unmanned aerial vehicles, and providing penalties.

B. “Course of conduct” means repeatedly maintaining a visual or physical proximity to a person without legitimate purpose or repeatedly conveying oral or written threats, threats implied by conduct, or a combination thereof, directed at or toward a person. “Course of conduct” includes the use of an unmanned aerial vehicle, as defined in section 708C.1, to maintain visual or physical proximity to a person as provided in this paragraph.

As used in this section, unless the context otherwise requires:

“Dangerous weapon” includes an instrument or device designed for causing damage to property.

“Image” means any capturing of sound waves, thermal, infrared, ultraviolet, visible light, or other electromagnetic wave, odor, or other conditions existing on or about property in this state or a person located on that property.

“Unmanned aerial vehicle” means an aircraft that is operated without the possibility of direct human intervention from within the aircraft.

An agency may use an unmanned aerial vehicle without preserving any images under the following circumstances:

When searching for a suspect who committed a crime.

When supporting the tactical operation of another agency.

For crowd monitoring at events.

An agency may use an unmanned aerial vehicle on public property.

B. An agency shall not arching data captured or received through the use of an unmanned aerial vehicle unless the data was captured or received during an operation in conjunction with a search warrant or during the existence of an emergency under paragraph “a”, subparagraph (3), but only for forty-eight hours except upon entry of a district court order requiring the archiving of the data for more than forty-eight hours.

A person shall not use an unmanned aerial vehicle to capture an image of an individual or private property with the intent to conduct surveillance, or to stalk, follow, or intimidate another person.

Spraying a liquid or gas. 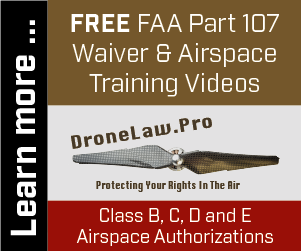 An unmanned aerial vehicle shall not be equipped with a dangerous weapon.

This section does not apply to an operation, exercise, or mission of any branch of the United States military, or the Iowa national guard.

A. A person who violates this section commits an aggravated misdemeanor.

B. A person who violates this section and causes serious injury to another person commits a class “D” felony.

C. A person who violates this section and causes death to another person commits a class “C” felony.

The number of instances in which an unmanned aerial vehicle was used by the agency and the purpose of each use.

The annual cost of the unmanned aerial vehicle program of the agency.

B. The department of public safety shall compile the information provided by the agencies under this subsection and present a report detailing the use of unmanned aerial vehicles to the legislative standing committees on government oversight by January 15, 2019, and every January 15 thereafter.

NEW SUBSECTION. 6A. “Control” includes the actions of a person using an unmanned aerial vehicle.

NEW SUBSECTION. 10A. “Enter” includes the actions of a person using an unmanned aerial vehicle.

An Act regulating the use of drones and unmanned aircraft, and providing penalties.

As used in this chapter unless the context otherwise requires:

“Drone” means any powered aerial vehicle that does not carry a human operator, uses aerodynamic forces to provide vehicle lift, can fly autonomously or be piloted remotely, can be expendable or recoverable, and can carry a lethal or nonlethal payload.

“Unmanned aircraft” means an aircraft that is operated without the possibility of direct human intervention from within or on the aircraft.

A law enforcement agency shall not use a drone or other unmanned aircraft to gether evidence or other information pertaining to criminal conduct, or conduct in violation of a statute, ordinance, regulation, or rule, except to the extent authorized by a warrant.

In a civil action an aggrieved party may obtain all appropriate relief to prevent or remedy a violation of all this chapter.

Any information obtained or collected in violation of this chapter shall not be admissible as evidence in a criminal civil, or administrative proceeding.

FAQ on Iowa Law and Drones 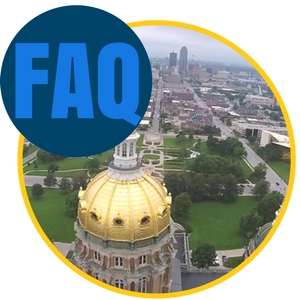 If you do not see your question, or an answer to it, listed below, feel free to get in touch with us and we’ll gladly give you one.

Is a drone/UAS considered the same as a model aircraft?

The United States Congress has defined and concluded that a model aircraft is only considered a drone or a UAS when the following points are met:

If your model aircraft, regardless of whether or not you acquired it pre-built or built it yourself, meets the above points to your knowledge, it’s considered a drone/UAS.

What is the Small UAS Rule?

The Small UAS Rule requires those who have unmanned aircraft systems, or UAS, that weigh less than 55 pounds, payload included, to register their aircraft with the FAA. This only applies to recreational or hobby fliers and not commercial drone use, however.

Is the FAA’s Small UAS Rule still in effect?

Yes, it has been in effect from August 29th of 2016 and is still in effect at this time of writing.

Do I have to carry my Certificate of Aircraft Registration while flying my UAS at all times?

Yes, you must have the registration certificate from the FAA at all times during flight operation. In accordance with federal law, all UAS operators must show their certificate of registration to any local, state, or federal law enforcement officer when they are asked to do so.

What do I do for registration if my UAS is over the 55-pound limit?

If your UAS weighs more than 55 pounds, including payload, you will need to register it by clicking here.

Knowing the laws, regulations, restrictions, etc., regarding drones in your state is extremely important. Remember to educate yourself, follow the rules, fly safely and responsibly, and have fun!