Well, folks, it’s finally here! The much-publicized “See The Bigger Picture” event was, indeed, a reveal and launch for the Mavic Pro 2. Dronethusiast will publish a full review of this new drone shortly, but for now let’s talk about the great new specs that DJI unveiled today.

As rumored, the drone will simply be known as the “Mavic 2”, even though it’s a sequel to the Mavic Pro and has nothing to do with the Mavic Air. It will be split into two versions, which we describe in detail below:

What we know about the DJI Mavic 2 Pro:

In short, the Pro version of the Mavic 2 comes with a much better-quality camera than the Zoom, and is the only real choice for serious photographers.

What we know about the DJI Mavic 2 Zoom:

In short, the Zoom version of the Mavic 2 is cheaper, easier to use, and more versatile. It may not be the ideal choice for photographers, but it still takes great video and is sure to become one of the most popular folding drones on the market.

DJI has been teasing its “See The Bigger Picture” announcement for almost two months now. The event – originally scheduled for July 18th – is now scheduled for August 23rd, 2018, and DJI has just released a new video with some clues as to the nature of the event:

The video features sweeping aerial photography with a wide angle lense and at least one shot that appears to have been taken with a 360 degree camera. The focus of this event definitely seems to be on the photography features of DJI’s newest drone (pictured briefly in the Instagram video’s opening shot). Even the name of the event – “SEE THE BIGGER PICTURE” – suggests that higher image quality and/or resolution is the key feature on offer.

For more than a decade we’ve taken the dimension of space to give you the freedom of flight. But did you think we’d stop there? Let us take you beyond the horizon, where something incredible awaits. It’s about time.

The suggestion that the focus of DJI’s previous products have been about space, and that the new one will be about time, most likely implies that the new drone’s camera will have some kind of slow motion or time lapse photography feature (unless DJI has decided to leave the drone industry and start building time machines instead.) Indeed, the footage in the video appears to speed up and slow down at various points, and one can assume said footage was taken with whatever the new drone is.

Most commentators suspect that the August 23rd announcement – which DJI promises will be their “biggest announcement of the year” – will be the reveal of the long-rumored Mavic Pro 2. Indeed, DJI all but confirmed it a couple of weeks ago when the latest version of the Argos catalog contained a listing for the Mavic 2 Pro and Mavic 2 Zoom editions.

When questioned about the link, DJI replied that “This preprinted catalogue was scheduled before we postponed our ‘See the Bigger Picture’ event” and that “This early look just hints at the many exciting features and capabilities DJI will announce at the proper time.” This would certainly seem to suggest that the original See The Bigger Picture announcement was going to reveal this new drone and that the new announcement will do the same thing.

The DJI Phantom 5 was also rumored to release sometime this year. If this is DJI’s “biggest announcement of the year,” one can assume that only one of these two drones is getting an official announcement – or, potentially, that they’re both getting announced at once. However, with the recent buzz in the Chinese press suggesting production difficulties with the Phantom 5, the Mavic 2 seems like the more likely choice.

What do you think? Do you agree with the majority of drone enthusiasts who believe that this announcement is going to reveal the latest in the DJI Mavic line? Do you think the Phantom 5 is finally going to take the stage? Or will we see something else entirely? Let us know in the comments, and be sure to check this page after the announcement on the 23rd – we’ll be keeping it updated with all the latest information as soon as said information is available.

At 10 AM on July 18th, 2018, DJI will be making a major announcement to the public and press. The event is simply titled “See The Bigger Picture” and was announced with a single mysterious teaser image. Some people think they might be officially announcing a release date for the DJI Phantom 5, while others think it might just be more info about their HQ’s new skybridge. But many believe and hope that “See The Bigger Picture” means that DJI is finally coming out with an updated version of their most advanced camera drone, and that we might soon be seeing the DJI Mavic Pro 2 in stores and on Amazon.

There’s lots of rumors surrounding the upcoming DJI Mavic Pro 2, but how much of it is true? We’ve compiled all the information we have in this handy article so that you can see for yourself.

Rumors from the Chinese press indicate that beta testing on the Mavic Pro 2 ended sometime in January of this year and that mass production started in February. This, combined with other buzz from organizations in China, suggests that the Mavic Pro 2 will be available sometime in the year 2018.

However, none of the Mavic Pro 2 leaks can agree on when exactly that time will be. The first rumored date was March. When March passed with no news, leaks suggested that it would be coming out in late spring. It’s now the middle of summer, and we still have no official word on when this new drone will be available for sale.

Many people think that the “See The Bigger Picture” event which DJI originally scheduled for July 18th, 2018 was going to be the official launch date of the drone. However, the mysterious event has been postponed indefinitely, for reasons which we cover in a later section of this article.

Most of these leaked Mavic Pro 2 specs come from a Chinese journalist who goes by OsitaLV, who has a good track record with leaks in the past and who is generally considered a trustworthy source. In addition to the following specifications, he also provided this image: 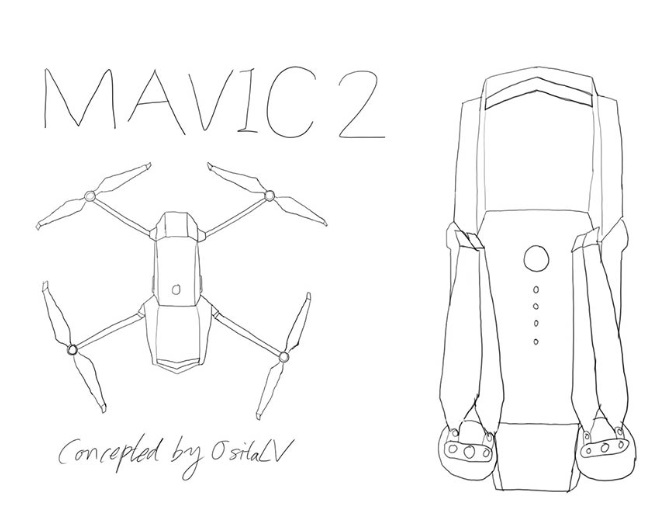 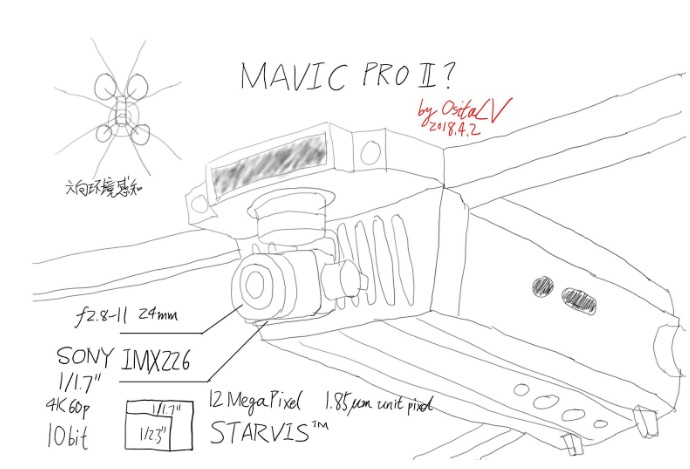 The biggest difference between these images and the existing DJI Mavic Pro are the chevron design on the front of the vehicle and the implication that the Mavic Pro 2 will be equipped with a new 1/1.7 inch Sony IMX226 sensor. That would be huge, as it would make the new version of the Mavic Pro definitively better than the Phantom 4 Pro, whose biggest selling point over its more portable cousin at the moment is the larger sensor.

That said, the veracity of these hand-drawn images have been called into question, largely because the camera appears far too large for a foldable drone of this type. This will be an issue no matter what the drone’s specs actually end up looking like: DJI will have to balance the portable appeal of the Mavic line with the consumers’ desires for better high-tech features.

UPDATE: A more recent image has been leaked by DroneDJ.com: 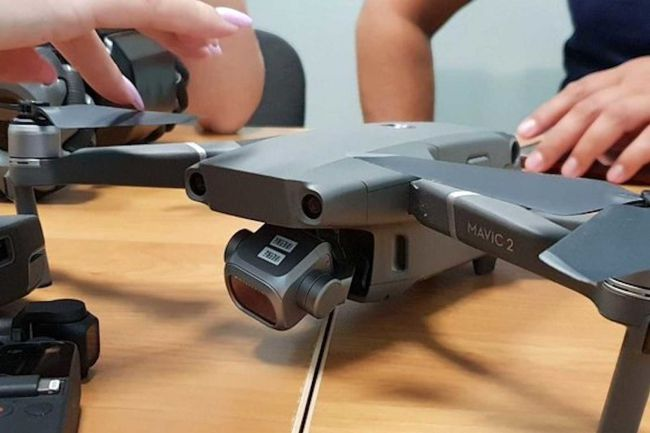 This quadcopter looks similar to the original Mavic Pro, with the same silver body and foldable limbs, but it appears to confirm the rumors that the new drone has a wide-angle lens, more object awareness sensors, and a removable gimbal. It also has the name “Mavic 2” printed on the side.

There is a good chance that this photo has been faked – the similarities to the old Mavic Pro may be an indication that this is simply an edited version of that existing drone rather than a functional prototype. Furthermore, DroneDJ would have a lot of incentive to have the first scoop on a drone that doesn’t actually exist, and we don’t know how scrupulous that website is. However, DJI has not yet responded to the leak, which suggests to some that they are unwilling to deny that the drone is real.

Here are some RUMORED specs for the Mavic 2, most of which come from OsitaLV and other members of the Chinese press:

The “See The Bigger Picture” Event

So. On July 18th, 2018, DJI will be holding a press conference in New York where they are expected to announce a new consumer drone. They teased the event with this image: 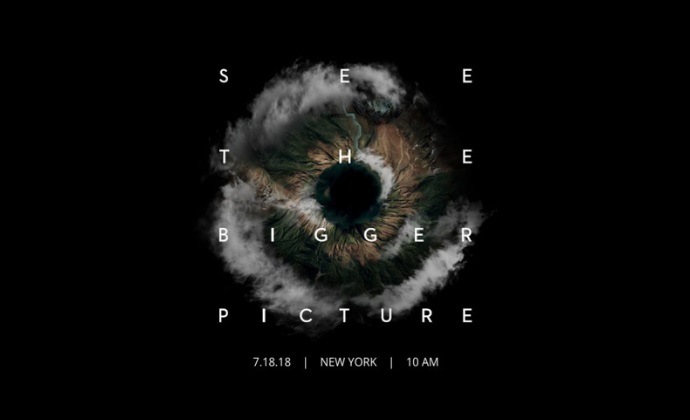 The picture is a panoramic view of a camera range taken with the “tiny planet” photographic technique, which suggests that whatever they’re announcing will have a 360 degree camera. This is supported by the “bigger picture” slogan, but that could also be referring to a larger sensor. All of these are potential features of the new Mavic Pro 2.

In addition, the Chinese press has been actively discussing the impending release of the Pro 2, leading some to believe it may be released sometime in the next 48 days, a window which would include the July 18th event.

Finally, in perhaps the most ridiculous piece of speculation, some forum users have pointed out that if you draw lines on the words, you can kind of make it spell “M II,” which could stand for Mavic II. This is a real stretch – the “I”s are sideways, it only works if you turn the picture upside down, there’s no reason they would call it a “II” with roman numerals when DJI’s other sequel drones all have the numbers written Arabic-style (e.g. “Mavic 2”) and “M” could refer to the Mavic Air just as much as it could refer to the Mavic Pro.

I mean, look, by drawing different lines we can make the letters spell “P5” for Phantom 5 and it’s equally likely: 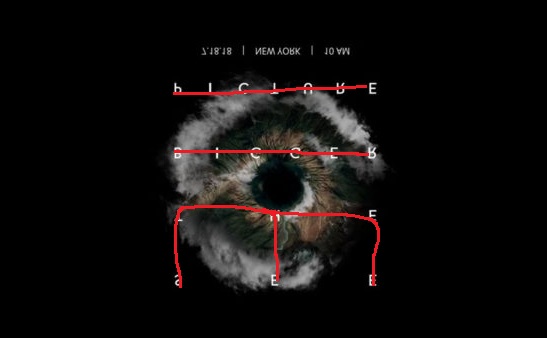 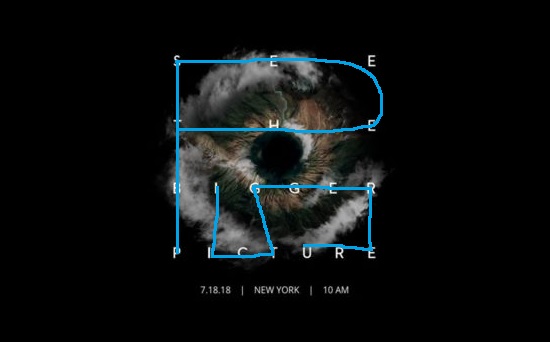 Leaving aside the more ridiculous claims, the idea that DJI will be announcing the Mavic Pro 2 at this July 18th event is certainly very possible, though even if they announce it on that day we may have to wait a bit longer before it hits shelves. We will be certainly watching the event closely and will update this article as the story develops.

UPDATE: DJI has postponed the “See The Bigger Picture” Event indefinitely, citing that they want to make sure that they can “exceed customers’ expectations for our technology by the time of the event… and deliver according to our standard of innovation.”

The statement certainly seems to suggest that DJI is in fact planning to reveal a new drone at the event, and the delay might have been in response to the release of the new Parrot Anafi only a month earlier. This drone, which is similar to the Mavic Pro, could potentially be a competitor for the Mavic 2, so DJI might want to hold off on releasing the drone until the competition is a little less stiff.

We will update this article when DJI sets a new date and time for the event.

The DJI Mavic Pro is our favorite of DJI’s small drones, so we definitely can’t wait for a sequel! Of course, it’s important to remember that rumors and leaks, no matter how reliable, are just that. Don’t get your hopes up too much. We know the Mavic Pro 2 is coming, so just be patient and trust that the world’s most innovative drone company won’t let us down.